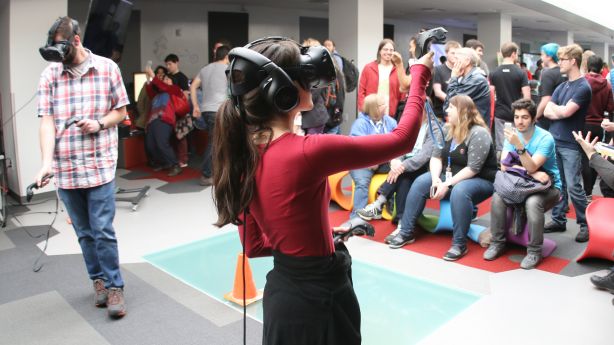 Students from the University of Utah’s Game Design Program watch a virtual reality demonstration. The program was recently ranked third in the country for undergraduate game design programs by US News & World Report. (University of Utah)

The university’s Entertainment Arts and Engineering program, which is part of the College of Engineering, tied the Massachusetts Institute of Technology and New York University in third place while costing at least 77% of less than other schools ranked at the top of the US news list.

The US News & World Report University Rankings are among the most comprehensive lists for students. This is the first time they have ranked game design schools.

The publication rates schools based on surveys and data regarding factors such as graduation rates, retention rates, academic reputation and faculty resources.

This ranking is another accolade for the 14-year-old program, which is frequently ranked among the top video game design programs in the country. Earlier this year, Animation Career Review ranked the program # 1 on its list of the best public game design schools and colleges in the United States.

â€œEAE is an established leader in games research and education,â€ said Michael Young, the program director, in a press release. “Our recognition as one of the top programs is a testament to the growing importance of game education nationwide and the role of the University of Utah in shaping the future of games.”

Because their students have such a comprehensive education and the development of a wide variety of skills, Young explained that they are likely to be hired and influence the entire industry.